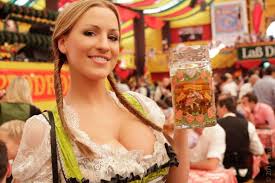 Oktoberfest is a festival that is originally held in Munich, Bavaria, Germany every year. The festival starts in mid to late September and runs until early October. The fair is one of the largest in the world and sees 6 million attendees every year.

The origins of the festival go as long back as 1810, when the royal wedding of King Ludwig I and Princess Therese of Saxony-Hildburghausen took place. The festivities included a great horse race followed by their marriage.

The festival show cases a range of beers served in Munich since 1818 and are supplied by 6 popular breweries. They are known as the big 6; Spaten, Löwenbräu, Augustiner, Hofbräu, Paulaner and Hacker-Pschorr. Originally the beers served at the event are brewed in March and have an alcohol content of 5.5% – 6%.

Visitors to the event can also enjoy a mixture of attraction, rides, games and side stalls. Usually as a souvenir, visitors purchase a decorative beer mug to remember the event.