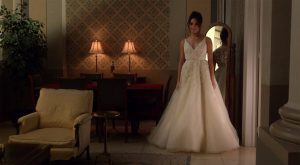 Once Meghan Markle and Prince Harry announced their engagement, the public has been wondering what Markle’s wedding dress style will be.

Markle spoke out about the wedding dress that she wore on suits on season 5 “Cold Feet” episode and said that the dress was one of her favorites. When interviewed by Glamour the actress also said that she loved Delphine Manivet and Christos Costarellos for their uniqueness and beauty. She then added that she was also a fan of Ellie Saab and J. Mendel as they do spectacular structural designs.

On the episode, Markle wore a classic, fairytale dress inspired by Anne Barge and her character’s style. She said she loved the dress for its ballerina inspired neckline.

She says that her style is classic with a modern twist and she would love to wear a wedding dress that is whimsical or subtly romantic.

When asked what celebrity wedding dress she loved, she said that she loved Carolyn Bessette Kennedy $40,000 Narciso Rodriguez slip dress.

Markle also added she is very traditional and sometimes superstitious. She added that she also believes in her future husband not seeing her dress before the big day.

The tabloids will be waiting to get a glimpse of the new addition to the royal family picking out her wedding dress and selecting a designer. Whomever Markle chooses to design her dress, will soon become popular in both the UK and the US.