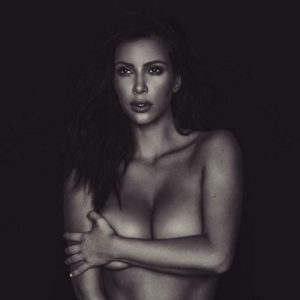 Kim K’s many fans have enjoyed her many nude selfies but her biggest fan is Kanye West.

He told Harper’s Bazaar ICONS issue “I love her nude selfies, Like, I love the ones from the side, the back ones, and the front. I just love seeing her naked; I love nudity. And I love beautiful shapes. I feel like it’s almost a Renaissance thing, a painting, a modern version of a painting.”

He went on to say “I think it’s important for Kim to have her figure. To not show it would be like Adele not singing,”

Kimi K also admits that she never expected her nude selfies to be this famous “I was about to get in the shower; I took a nude selfie, kept it in my phone for over a year. I just liked the picture, so I was like, Let me put censor bars on it and post it.’ I don’t do things to be like, ‘This is powerful. I’m going to show you guys that this is my message.’ I’m not that type of person. I’m empowered by it, but I’m not doing it specifically to show power.”

Her nude photos have become the conversation of female empowerment and feminism. Kimi K said “[The response] was so shocking. And when I put the bars on it, it was more covered up than a bikini!”