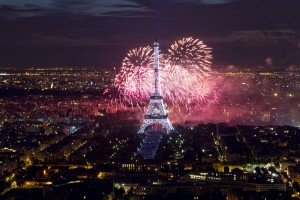 Just like the 4th of July celebrations, every 14th of July France is also decked in blue, red and white colors. However, instead of the beer and backyard barbecues so typical of the USA, France’s celebrations encompass decorated military, red wine and lush banquets. All around the world freedom is celebrated among French people at Bastille Day and on this night, fireworks are everywhere making the City of Light shine brighter than normal.

It’s generally an honor to be invited to a French home on Bastille Day. Typical meals consist of vegetables, fruits, quiches and salads. The red wine, which is quite dissociable in French cuisine is also ever present.

The Bastille Day is celebrated to commemorate July 14 1789 when troops had stormed the Bastille, which was an impenetrable fortress built in Paris in the 14th century. The fortress later served as a prison used by the harsh Bourbon monarchy in the last 1700s. The storming of the Bastille paved the way for the French Revolution. The battle was quite short and resulted in the revolutionaries successfully taking over the fortress and fortifications. Prisoners were also released. Their opponents’ heads end up on pikes for every to see.

One year following the “Prise de la Bastille”, the Fete de la Federation was celebrated on the 14th July 1790. This marked the establishment of a constitutional monarchy. Absolute monarchy was banished and Marie Antoinette was beheaded by the guillotine. Official celebrations that came later on were also celebrated on the 14th of July, making this date truly unique in French history.