A number of festivals, while seeming completely strange to the outside world, tend to make perfect sense to a particular culture or community.

This is for the simple reason that in celebrating such an event year after year, the entire community comes together as one, in remembering their unique history and ‘roots’.

Having said that, here are 3 strange world festivals:

This is the reenactment of an ancient Incan procession since 1944 where a number of actors get together while dressing in traditional Incan wear. The journey begins at Qorikancha (a temple dedicated to the Sun God) up to the ancient fortress of Sacsayhuamán. One person enacts the king’s role who will ask for the sun’s blessing in the language of Classical Quechua – the language of the Incans. This festival was usually celebrated to welcome the summer. Only now, the sacrifices are only a stage act. 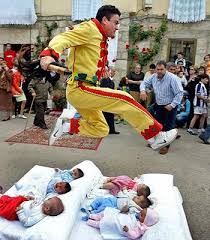 The Lopburi monkeys in Thailand are known for their voracious appetite and for snatching snacks that are left unattended. For this, since 1989 the residents hold a feast in front of the Pra Prang Sam Yot Temple where all a monkey’s snack, such as cucumbers, peanuts, bananas and even raw crabs, are laid out for them to devour.

This eight-day religious celebration involves worshippers of Saint Constantine who have the ability to walk and dance barefoot over fire. Music is also played and as its tempo gets faster, these worshippers say that they do not feel the flames. Apparently, this festival dates back to the time when Saint Constantine and his mother were trapped in a church that caught fire. Legend has it that the rescuers were apparently unscathed by the flames.