Opinion: Trump needs to be stopped 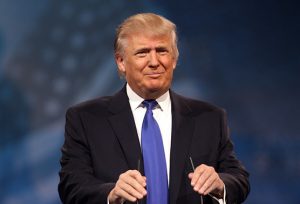 1) Today started with OMG, he’s attacking a senator for lying about what his Supreme Court justice really said….

2) ….and attacking him for not actually serving in Vietnam, only being in the US Marine Corps Reserves while Trump took five deferments.

3) As I digest that, he went on to attack another senator and decorated veteran, John McCain, as somehow not being capable of talking about military issues….

4) He then hid behind the fallen solider in last month’s raid to say it was all about winning….

5) But just in case hindsight turns out that it wasn’t the big success he claims, he tosses out an “according to General Mattis” disclaimer so that the Donald can later say it wasn’t, you know, his fault.

6) And then Conway comes on from the White House Briefing Room to literally tell us she’s doing a commercial for Ivanka Trump’s products, following what her boss Trump started yesterday

7) And the he does the ALL CAPS screaming at three judges of our judicial system.

This all happened in one day!

Look, most of the people who comment on my posts about Trump tend to agree with me that the guy is crazy. I really do actually appreciate those who do like him or voted for him who contribute constructive feedback. There’s even the thing here or there where I can think Trump has a point. And while I usually vote Democrat and lean heavily liberal, not always on all things. I’m ultimately trying to be common sense / pragmatic.

I acknowledge that I definitely have my filter bubble of like minded folks. That there are others out there who saw Barack Obama as the crazy person I see Donald Trump to be.

And yet really? Really? This isn’t a president who is leading a revolution with thought and care. This is a crazy person with no respect for anyone other than his own ego. And that’s a really bad person to have as president.