4 Unforgettable Festivals Around The World

Almost every country has unique festivals that can turn out to be a once in a lifetime experience for travelers.

In fact, this can bring in a lot of revenue in a few days as it is far more appealing than having a number of historical places to visit.

For example, the Rio Fest earns much more than Turkey even if the latter has a number of historical places to visit.

Here are 4 such unforgettable festivals that prove to be economically profitable too:

This festival has been held since 1591. Even if it is popular with thousands of visitors attending it every year, the bullfights, Running of the Bulls are controversial if not clearly dangerous. There’s a carnival that is a part of the celebrations too. 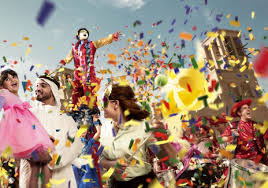 There’s no other place that celebrates Chinese New Year like Hong Kong does. Among the many delights that await those who visit during this time, they will be treated to sports events, flower markets, night parades, busy temples and most of all, absolutely breathtaking fireworks.

This is a festival which is held annually in the Black Rock desert in Nevada. About 48000 people attend this event to create art and express their individuality. As most people who attend the festival admit, you need to be there to truly understand what the festival is about.

If you could pick the best time and place to get drunk, the Oktoberfest in Munich would be it. This is also the biggest beer festival in the world with clearly an international flavor characteristic. About 6 million visitors come to Munich every year in October.